We had the pleasure to visit the exhibition “ Buddha’s life, Path to the present” in De Nieuwe Kerk in Amsterdam. We admired the art of thousands years old combined with contemporary art by the controversial artists Ai Weiwei and Yoko Ono.

Uncertainty surrounds the exact year of the birth of prince Siddharta Gautama, later known as the Buddha. He probably lived between 490 and 410 B.C.

He was born in the republic of the Sakyas in nothern India as the son of the elected Suddhodana. 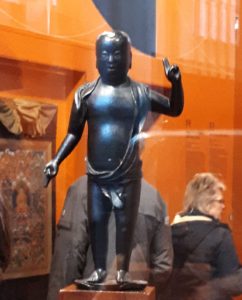 The biography of the Buddha, like that of major religious figures, includes signs that he was no ordinary man. One of the legends has it that as soon as he was born Siddharta took seven steps.

At each step, a lotus flower blossomed under his foot. Then he looked in all directions and spoke the words “This is my last birth”. 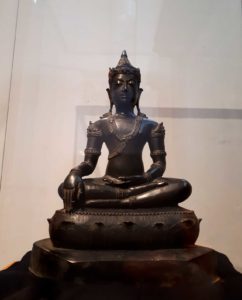 The position of this Buddha’s hands indicate his triumph over the evil forces of Mara (Maravijaya). He wears a crown and decorative jewellery. These attributes show that he is the king of heaven or the universal ruler (Cakravartin).

It is not surprising that monarchs often had many sculptures of Buddha Maraviyaja to demonstrate to the outside world that they were holy Buddhist kings. 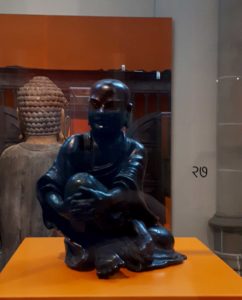 Rakan, Japan, made by Akahoshi Hachizaemon for the Kounji Temple near Nagasaki in 1663

The Buddhish saint, elegant, gentle and dignified, depicted in a slightly bent pose was part of a group of four arhats (enlightened beings), known as rakans in Japanese. The other three are still in Kounji temple near Nagasaki. Rakans, the original devotees of the Buddha are endowed with wisdom and supernatural powers. They bring peace by spreanding the message of the Buddha. This may be Ranula, the son of Siddhartha Gautama and follower of his father from the age of seven. 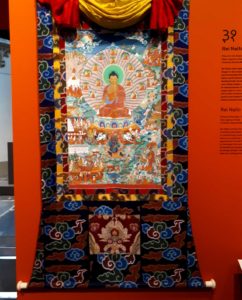 Thangka: Scenes from the life of the Buddha’s, Tibet, 19th century, Gouache on cotton 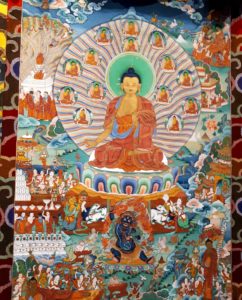 This painting shows three of the twelve great deeds of the Sakyamuni Buddha. In the centre, we see him using miraculous powers on fourteen different occasions. At bottom right, he descends from the from the “Tusita Heaven”, where he was been instructing his mother for three months. At bottom left, he arrives in Mahanirvana (Great Nirvana) at the age of eighty and above that scene is his cremation in a stupa.

The dancing figure before the central Buddha is the wrathful Bodisattva Vajrapani, one of his leading disciples. 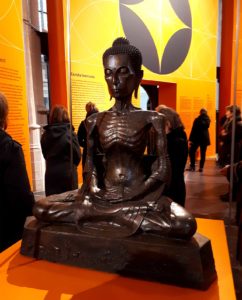 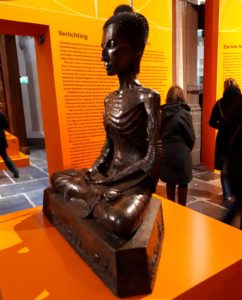 One of the most iconic Buddha statues.

Before Siddhartha Gautama found enlightenment, he meditated and fasted for six years. He lived with a single grain of rice each day. At a point he would had died from starvation if some villagers didn’t take care of him by feeding him and curing him. 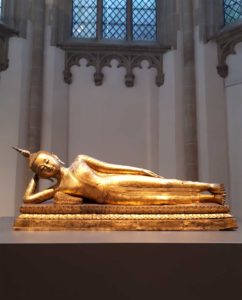 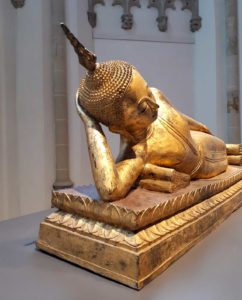 The Buddha rests his head on his right arm. There is a legend related to this recliningn posture. The Buddha appeared before the giant Asurindarahu, who had wanted to see the Buddha but because of his superior height refused to bow down to him. The Buddha made himself very tall and gave the giant a glimpse of celestial figures that were even larger. The giant was thus humbled.

Reclining Buddhas are usually very large, with the feet placed one atop the other. 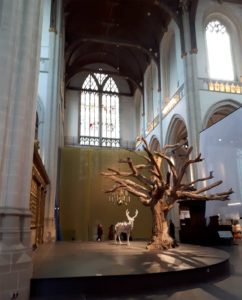 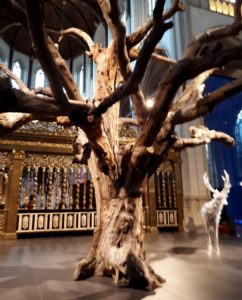 This tree is created by recycled wood and symbolizes among others the tree that Buddha reached the Nirvana. 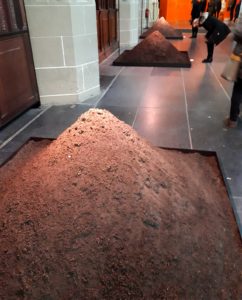 Soil from regions that have experience a lot of suffering 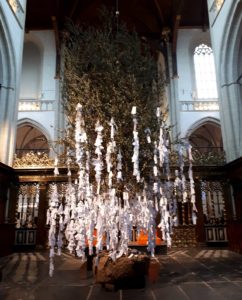 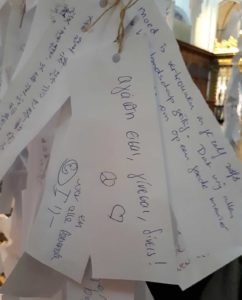 A tree the “grows” continually with the wishes that people write and hang upon on it.

The exhibition will continue till the 3rd of February.

PreviousAll about Mother of Pearl, its history and its qualities